The Birman is said to have originated in western Burma; and certainly cats with similar markings are recorded in documents from ancient Thailand. One story claims that a pair was given as a gift to an Englishman named Major Gordon Russell and his friend August Pavie by the priests of the Khmer people; another that the cats were acquired by an American named Vanderbilt from a servant who had once been at the temple of Lao-Tsun where the cats were kept as sacred animals. 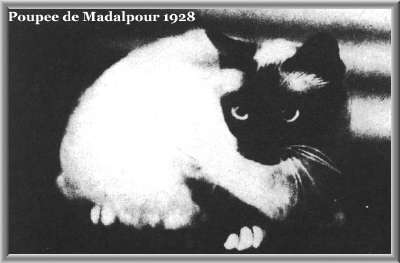 Whatever the name of their new owners, most historians agree that the original two cats were shipped to France and that the male died on the way.

The female, named Sita, is said to have been in kitten and to have produced a kitten named Poupee de Madalpour. 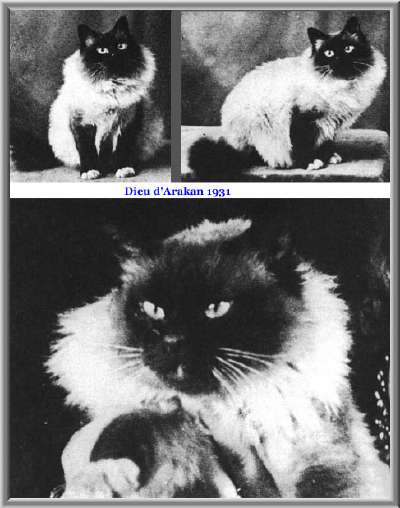 In 1925 it is recorded beyond doubt that the Federation Feline Francaise recognized the Sacre de Birmanie as a championship breed. A photograph taken in 1930 shows a male of the day named Dieu d'Arakan which became the blue-print for the breed. He was owned by M. Baudoin- Crevoisier, well known as a breeder of Birmans at that time. Later Dieu d'Arakan was sold, together with six other Birmans, to Princess Ratibor and she subsequently left them in her will to the Duke d'Aosta. Eventually their ownership was transferred to the Countess Giriode Panissera and their pedigree line became famous worldwide. During the war M. Baudoin- Crevoisier managed to keep a few cats entire. His champion male Orloff de Kaabaa and his female Xenia de Kaabaa became the breed's foundation cats.

The name Birman is from the French spelling for Burma. "Birmanie." American Breeders follow an old French tradition. of naming kittens alphabetically by the year they are born in. For example, 2002 is "Z", 2003 is "A", 2004 is "B" and so on. By following this tradition it is easy to tell a cat's age just from its name. (Note: the first word in a cats name is the breeders cattery, then the cats name, then if required the current owners cattery)

In Germany a line of Birmans was maintained by Hanna Kreuger of the von Frohnau cattery and Liselotte von Warner of the von Irak cattery. Together with descendants of Orloff and Xenia they formed the nucleus of the post-war breeding stock.

The Birman first traveled to the USA in 1959 when Dr and Mrs Siepel of the Janacques cattery imported a male, Irrouaddi du Clos Fleuri.

Birmans arrived in Britain in 1964 when a male and two females were sent from France to Elsie Fisher and Margaret Richards. These two breeders registered a joint cattery name, Paranjoti. 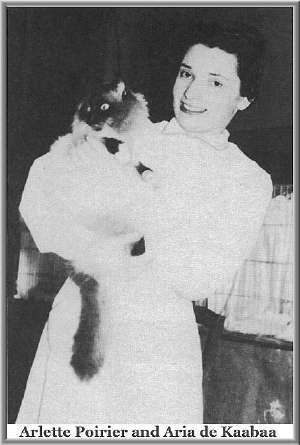