A DNA-based test for the myosin-binding protein C gene mutation, which has been proven to be causative for HCM in Maine Coon cats, is now available to breeders.

Disclaimer: I first wrote this paper as a report of what I thought to be Dr Meurs' webseminar highlights, as a Maine Coon breeder who felt concerned about sharing what I had learned there, and then added answers to the frequently asked questions following the lecture. I'm not a geneticist nor a veterinarian.
Dr. Kittleson & Dr. Meurs had the great kindness to review and edit it all, giving more substance to it than I would ever have been able to. Paul Huntley (Lunarcoons Cattery) as well supportively helped me with his comments.
Of course, any remaining mistake or misinterpretation holds on my own responsibility.
Any questions or comments are welcomed at Den här e-postadressen skyddas mot spambots. Du måste tillåta JavaScript för att se den..

Previously on "What's up with feline HCM research?"

In the early 1990s when some of the first HCM cases in Maine Coon cats had been reported as a familial issue, Dr. Kittleson from UC Davis built a colony with affected MC cats to study the disease. In 1999, a published study[1] showed the colony's HCM was due to an autosomal dominant trait with complete penetrance but variable expressivity (depending primarily on the sex of the cat[2]).

Last October[3], Dr. Meurs, Dr. Kittleson and their team published an article that identified a genetic mutation that causes HCM in every affected cat in the colony's family of cat. That mutation has been isolated by genetic sequencing. This is the genetic mutation the DNA-based test looks for.

The identified gene codes for the cardiac myosin-binding protein C (MyBPC). The mutation was found in the very beginning of the MyBPC3 gene. Don't worry, you're going to get used to using these words soon!

On 2005, December 21st, Dr Meurs has given a two-hour lecture broadcast through the Web, entitled "Inherited hypertrophic cardiomyopathy in the cat".

Dr. Meurs' lecture's report: understanding what this DNA test does test for

The lecture began with a reminder about what HCM consists in:

A point mutation (one nucleotide is changed), on one of the genes that causes HCM in humans, has been identified as causing HCM in Maine Coon cats through sequencing the gene.

This mutated gene is:

This mutation concerns a gene that codes for cardiac myosin-binding protein C (MyBPC). Mutations on this gene are one of the most common cause of HCM in humans.

On the schema below, the myosin-binding proteins C consist in the blue "bubbles". (These proteins attach to several proteins in the sarcomere to maintain stability. The actin proteins are the red bubbles and the myosin proteins are the green-greyish filaments: they "slide". The myosin heads are the big yellow clumps that have to ratchet and attach to the actin's fixative points in order to produce movement. That's how the cardiac cells normally "shorten", and hence the cardiac muscle actually tenses). 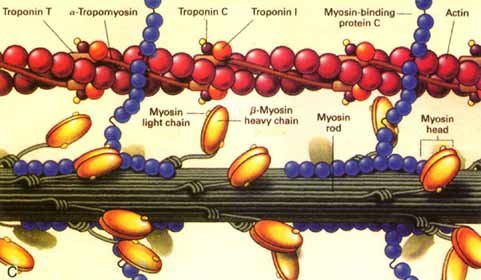 More precisely, this mutation concerns one specific codon (a codon is 3 nucleotides - DNA or RNA "units" - that tell the genetic machinery within a cell to produce a certain amino acid[6]) in the cardiac myosin binding protein C gene sequence: instead of a GCC codon (guanine-cytosine-cytosine), there's a CCC codon.
Consequently, when the cardiac myosin-binding protein C is built in the cell, the CCC codon induces the formation of a proline amino acid in the protein instead of alanine. Hence the protein built is defective.
The defective protein conforms abnormally theoretically disorganizing half of the cardiac sarcomeres and their ability to contract is abnormal. As a compensatory phenomenon, the heart muscle produces new sarcomeres to compensate and each time it does this it has a 50 : 50 chance of producing a normal sarcomere, which results in the muscle thickening. The thickening is called hypertrophy.

Practical considerations about the DNA-based test

The test identifies, in the DNA sequence for the MyBPC allelic pair, whether there're GCC codons (regular allele) or CCC codons (mutated allele).

Practically speaking, this means a positive test is fully reliable: a cat who tests positive will probably develop HCM at some time in its life and pass on the mutation to its offspring (half of it if heterozygous; on to its whole offspring if homozygous).

• What this test does test for: it eliminates one inherited cause of HCM in a Maine Coon cat if the test is negative. If the test is positive, it ascertains the cat will likely develop (or has) HCM and it can do so before there is any evidence of HCM on an echocardiogram.

• What this test doesn't test for: it doesn't test for all potential causes of inherited HCM. At this stage it is unknown if this mutation causes 99% of the HCM in Maine Coon cats or 10%. Consequently, it is still necessary to keep having echocardiograms performed by a competent cardiologist.

Something to know about: This mutation has been found in a domestic cat as well. On the other hand, at least two Maine Coon cats who had been echoed and diagnosed with HCM were negative for this specific mutation.
Practically speaking, this means there's probably at least one other cause for HCM in our breed.

At the beginning of the Webinar, Dr. Meurs had an essential message passed on: as far as biology is concerned, especially when molecular biology is concerned, there're no black and white answers. This test identifies one cause of HCM in Maine Coon and possibly other cats; this is one step we can use to deal with the disease and if this mutation is prevalent enough, to deal effectively with the disease in our breed.

Right now, there're no population statistics available. The basic reason for this is the DNA test hasn't been performed on a large enough number of cats to make scientific inferences out of it.

How can I have my cats tested for this mutation?

Here's the link to the providing test lab's webpage.

Have your veterinarian do it if you're not sure you can handle it.

The test costs 60 $ per cat, and 51 $ per cat if you test 5 cats or more. You can pay by international money order. Visa/mastercard payment is available as well.

This is complicated material, but totally rational as well. If we understand the facts, there will be less misinformation spreading over the internet and passing on from one breeder to another. If you feel uncomfortable with genetics or biology as a whole, you can always ask for help from someone who isn't and get advice about reliable books or websites to start with. This is a worthy investment[8].

For extra reading on HCM, you can visit Jody Chinitz's website.

[5] Kittleson et alii, Circul., 1999, 3178: HCM in these cats appears to be inherited as an autosomal dominant trait, as it is in human FCHM, with penetrance that increases to 100% in adulthood. Although penetrance may not be 100% in some human families with FHCM, often it is complete, as in our cats.

[6] If you want to learn about proteins synthesis, you can visit this page and watch the "Translation" and "The three steps of transcriptions" animations.

[8] Here are some instances of useful links :